Insulin is a highly effective anabolic hormone that is primarily produced in the pancreas, and small amounts are also produced in some neurons.

Increased plasma glucose levels trigger insulin’s release into the portal blood circulation and so it is transported to the liver which retains 50% of the insulin, the remaining 50% is released into the hepatic vein and transported to the heart, where it enters the arterial circulatory system and is distributed throughout the body ands bind onto insulin receptors in target cell membranes; the remaining insulin is ultimately delivered to the kidneys and excreted.

Insulin deficiency means it is impossible for cells to use glucose as an energy source and so they become dependent upon fat stores for energy – which may ultimately cause ketone production and ketoacidosis.

Sustained insulin deficiency results in hyperglycaemia and resultant health complications such as diabetes and damaged peripheral neurons, kidneys and eyes.

Occurs when cells are unable to respond to an insulin signal, or when there are insufficient functional insulin receptors – both result in glucose not being able to be transported into cells, and consequent hyperglycaemia; the pancreas responds by increasing insulin production to try and reduce glucose levels to normal.

Exogenous insulin is administered when insufficient effective insulin is produced endogenously. Until exogenous insulin was discovered 100 years ago, those with Insulin Dependent Diabetes, mostly children, died - slowly - it must have been awful for the staff and families knowing hospital admission was a one-way street.

There is now a range of exogenous insulin products available – all with varying durations of effectiveness. There seems to be a move away from insulin administration once or twice a day to a small dose of long-duration insulin administered daily plus a rapid-acting insulin administered at mealtimes ie trying to emulate physiological response; service providers offer a broad range of preferred diabetes management practices which do not always seem to be congruent with this century.

I have developed, and made available, a Human Insulin Preparations Chart that outlines the various insulins, their times to peak, and their durations of action; it can be accessed by clicking here. I suggest it is important to know both time to peak, and duration of action especially when a combination of oral and exogenous interventions are administered, either at the same time or throughout the day, so that maximum intervention periods can be identified. I also suggest qid BSLs for 3 days is adequate for identifying maximum intervention periods.

If the BSLs are elevated at an identified maximum intervention period then one should ask – are the BSLs elevated because the person is overmedicated or undermedicated?

What will you do when you see someone whose prescribed medications include an insulin intervention, will you –

Insulin availability is a literal life and death issue, and our understanding of the importance of insulin and how to manage diabetes has increased profoundly since insulin was discovered 100 years ago.

However, there is still room for improvement in our management strategies such as identifying maximum intervention periods, and duration of the intervention, so that we can further optimise outcomes. 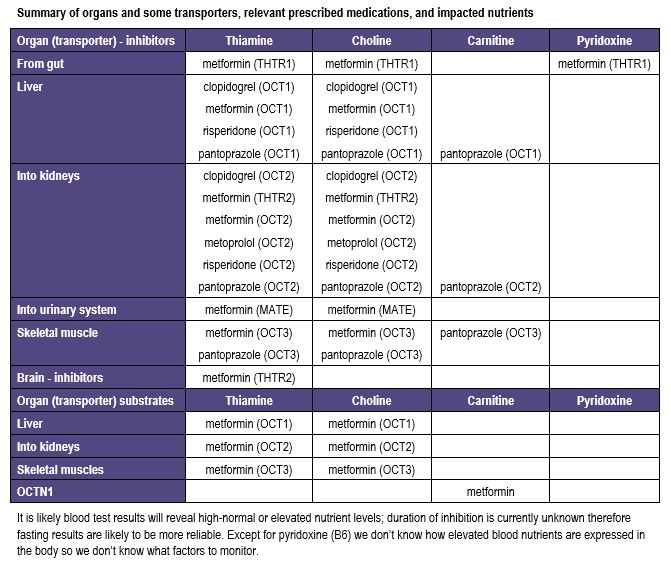 Advisable to check plasma proteins (albumin, total proteins) as they are the primary transporters for four of the prescribed drugs and hypoproteinaemia may alter their effects.

- last HbA1c indicates poor glycaemic control however this is not supported by current BSL monitoring therefore advisable to recheck status.

Currently prescribed 5 medications that may alter glycaemia, being atorvastatin, metoprolol, perindopril, risperidone, and of course metformin.

Mr ABZ is a tall, slender man with a lovely smile - he responded to my presence but not always to my questions.

Currently prescribed 9 medications that include nausea as a side effect.

Currently prescribed 8 medications that include diarrhoea as a side effect.

Currently prescribed 6 medications that include constipation as a side effect.

Currently prescribed 6 medications that include altered sense of taste as a side effect.

Diabex decreases B12 absorption - there is now a recommendation for regular B12 monitoring whilst metformin prescribed.

Two drugs that decrease B12 absorption, being diabex and somac, have been prescribed since admission and likely before then, therefore advisable to clarify B12 status.

Concurrent ingestion of panamax and iron resulted increased rate of iron absorption and decreased extent of drug absorption; the authors advise drug and iron to be administered at different times from each other.

As can be seen from the table, many of the prescribed medications alter nutrient availability to some of the key organs for an unknown duration via a plethora of transporter substrate and inhibiter mechanisms.