Medications, medicines, drugs are used interchangeably to describe chemical substances that are administered to confer therapeutic benefit; they interact with 3 key groups –

Until the early 1990’s the pharmaceutical sector considered food to be “benign” and their issue was whether to administer their drugs prior to food to maximize therapeutic benefit or with food to minimize side effects. Then in the early 1990’s a Canadian research team investigating felodipine/nifedipine interactions with alcohol discovered the grapefruit effect – subsequent research identified the key mechanism to be cytochrome (CYP) P450 isoform 3A4 and interactions with it are now part of the drug discovery process. No-one investigated which other foods also alter drug effect and 30 years later we still don’t have a comprehensive database on drug-food interactions.

Drug-nutrient interactions were also disregarded until 2012 when early clinical trials found that within several months of administration the then new drug fedratinib caused Wernicke’s Syndrome as it inhibited all the thiamine transporters ie absorption, distribution and excretion, and so it was not released. For some reason the metformin-B12 interaction remains “ignored” even with 60 years of evidence.

As the “drug” transporters research progresses, it is likely many currently unrecognized drug-nutrient interactions will be identified. In order to modify the negative impact of prescribed medications we do require our nutrition scientists to be clarifying issues such as -

Drug-food interactions have continued to be disregarded, even with the grapefruit findings and it is worthwhile pondering “why?”. Pharmaceutical research is based on many knowns – the amount of the therapeutic substance, and the functions and effects of the excipients (ingredients) associated with the therapeutic substance – their main unknown is individual physiological response which is governed by genetic and environmental factors.

So when food intake is associated with an altered response to a pharmaceutical intervention then the question is - is it caused by a pharmaceutical factor or a food factor? and how do we clarify the cause?

We do know about some single drug-food interactions – with alcoholic beverages, with grapefruit, and some related to caffeine. Perhaps the starting point is identifying interactions with a comprehensive range of single foodstuffs, and then as the expertise increases, we could consider more complex foodstuffs. Doing nothing because it is too difficult is unacceptable.

In order to encourage increased research in the areas of drug-nutrient and drug-food interactions, will you write to –

Summary of medications, nutrients and transporters 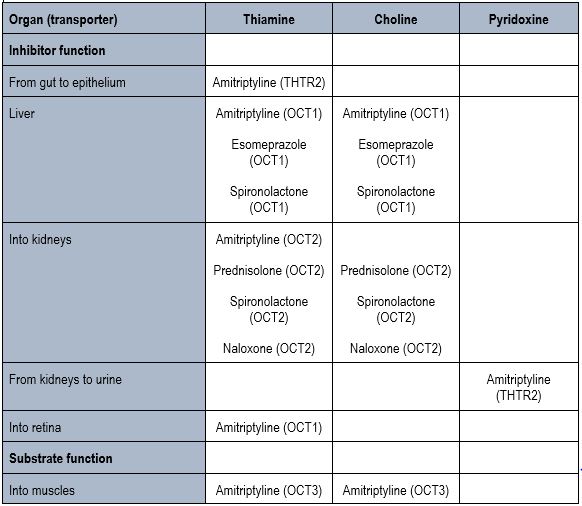 - elevated ferritin - typically indicates mobilisation of the storage form of iron to the active form due to inadequate iron availability; currently prescribed esomeprazole.

- linagliptin has a duration of 24 hours

- before breakfast BSLs - minimal, if any, coverage from previous morning’s gliclazide or linagliptin;

Currently prescribed 4 medications that include may alter glycaemia, being amitriptyline, frusemide, prednisolone and tacrolimus.

Prednisolone induces hyperglycaemia in the afternoon and evening but not overnight, consequently hyperglycaemia management strategies should target the timeframe from midday to midnight.

Currently prescribed 7 medications that include hyponatraemia as a side effect.

Currently prescribed 6 medications that include nausea, vomiting and diarrhoea as side effects.

Currently prescribed 4 medications that include altered taste and dry mouth as side effects.

Phenothiazine derivatives such as amitriptyline are similar in structure to vitamin B2 (riboflavin) and consequently decrease riboflavin availability.

Urinary thiamine losses have been indicated with almost all diuretics including spironolactone.

Mr ACE is a tall, big-framed, pale, breathless man with thyroidy eyes, a large abdo, and scrawny shoulders - he told me the food has a bitter and/or metallic taste and attributes it to the chemo. Mr ACE also told me he wishes to be provided regular meals as he was a sympathy-vegetarian to support his wife. Mr ACE also told me he enjoys milkshakes.

Mr ACE was weight stable at admission and is now losing weight.

Mr ACE has lost weight. Loss of weight is associated with depletion of zinc status and zinc is important in a range of body functions, including sense of taste and release of the hunger hormone Neuropeptide Y. Since Mr ACE has lost weight, advisable to check zinc levels and if inadequate then short term (90-120 days) intervention and recheck status prior to cessation of the intervention; however currently prescribed esomeprazole which may reduce the effectiveness of the intervention.

- vitamin C - pain increases the reactive substances (formerly Reactive Oxygen Species) within cells. Vitamin C is important in quenching reactive substances and if there is insufficient vitamin C then cell status becomes compromised and the cells typically die which also causes pain. Advisable to consider a vitamin C intervention - the optimal intervention is 500 mg vitamin C/day (if more than 500 mg vitamin C administered at a time then the excess above 500 mg is not absorbed as the vitamin C transporters are overloaded). Vitamin C is not considered part of the pain management armament however it won't cause harm and evidence suggests it may confer benefit. Currently prescribed esomeprazole which decreases conversion of vitamin C to its active form;