Coagulation (blood clotting) is a process that prevents excessive bleeding when a blood vessel is injured. Usually, a blood clot dissolves once the injury has healed however sometimes a clot will form inside a blood vessel without any obvious injury and/or may not dissolve naturally. 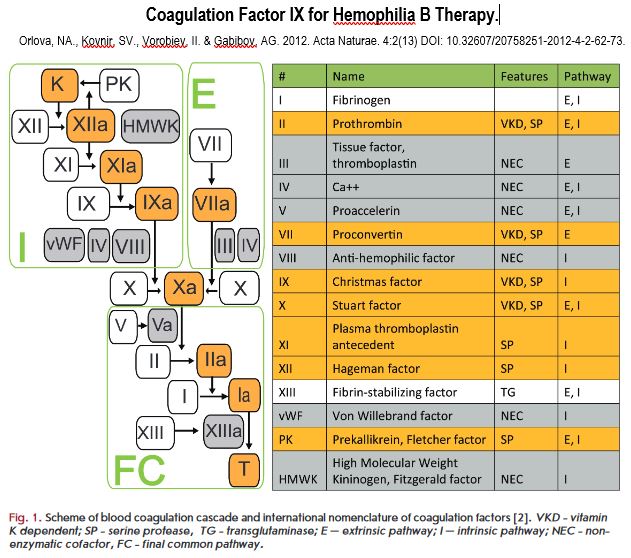 Important in the activation of several coagulation factors, including -

Low magnesium is prothrombotic and increases the risk of thrombosis by stimulating thromboxane synthesis – thromboxane is produced by platelets.

Factor IX requires both calcium and magnesium, as it has specific binding sites for each. Magnesium accelerates the calcium-dependent activation of factor IX via the intrinsic pathway activator factor XIa.

Magnesium is essential for the activation of vitamin D, and also for its inactivation when levels are too high ie optimal magnesium status is required for optimal vitamin D status.

Magnesium is also essential for the activation of vitamin C.

Vitamin D both directly and indirectly, affects the coagulation cascade by mechanisms such as -

There is an inverse correlation between vitamin D status and -

There is a positive correlation between vitamin D status and TFPI level.

Vitamin C has both pro- and anticoagulatory effects -

Copper is important in the functions of Factors VI and VIII.

Copper, alone and in combination with manganese and/or mercury, has been found to adversely affect thrombus formation and consequently potentially increase the risk for thrombotic events in exposed individuals.

Is associated with having indirect anticoagulation properties such as -

Vitamin A and its derivatives (retinoic acid and retinaldehyde) have significant antithrombotic properties through inhibition of thrombin and platelet aggregation.

What actions will you initiate when you see someone prescribed medications that negatively impact the status of nutrients associated with the coagulation cascade, will you recommend regular monitoring of –

Coagulation is a very intricate cascade that is at risk of disruption from external factors such as prescribed medications with disruption manifesting as either clotting or inability to clot – both consequences can cause significant harm.

Summary of medications, nutrients and transporters

Currently prescribed 2 medications that alter glycaemia, being frusemide and risperidone.

Currently prescribed 5 medications that include nausea as a side effect.

Currently prescribed 4 medications that include constipation as a side effect.

Currently prescribed 3 medications that include hyperglycaemia as a side effect.

Concurrent ingestion of paracetamol and iron resulted increased rate of iron absorption and decreased extent of drug absorption; the authors advise drug and iron interventions to be administered at different times from each other.

Mrs AGJ is a small, slender, pale, colourful lady who was participating in an activity which I interrupted. Mrs AGJ told me she has lost her appetite because she is concerned about family matters (a daughters marriage breakup), she has a nasty taste in her mouth, and her wound is getting worse and could also be impacting on her appetite. Mrs AGJ did tell me she likes milk drinks, and usually enjoys her food.

Mrs AGJ is either remaining weight stable or continuing to lose weight.