Whilst researching a related topic for a soon-to-be-published MedNut Mail email, I came across this diagram and asked the question “what are the likely mechanisms of action for metformin to alter pyridoxine’s (vitamin B6) metabolic pathway?” 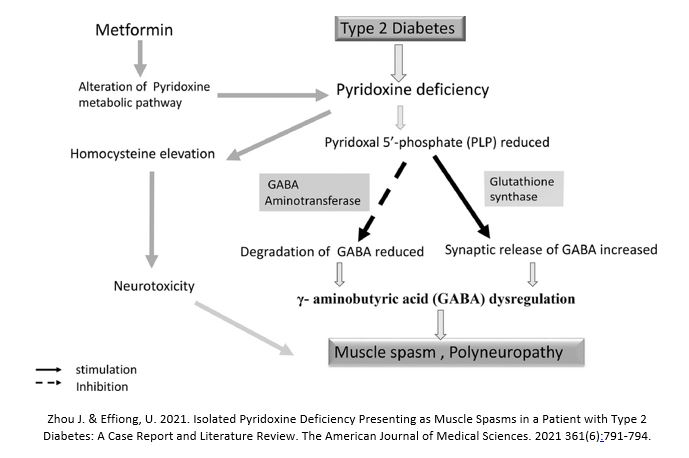 There is now early evidence that metformin use is associated with a higher risk of B6 deficiency, with one study estimating a risk increase of about 48% - the authors did not propose any mechanisms of action; needless to say the authors recommended more studies to identify the relevant mechanisms.

Some recent research suggests metformin may also negatively impact riboflavin (vitamin B2) status - the authors identified a degree of inverse association between metformin and B2 status. B2 is required for the generation of the active form of B6 ie perhaps low B2 contributes to or exacerbates B6 deficiency.

Given the evidence is recent but steadily increasing, what interventions will you initiate when you see someone whose prescribed medications include metformin and diagnoses include diabetes – will you -

Given metformin is the fourth most commonly prescribed drug in the world it is surprising its negative impact on B6 status has only recently been identified.

No recent relevant results available that may have a pharmaconutrition component.

No recent, relevant biochemistry available. Advisable to check plasma proteins (albumin, total proteins) as markers of nutritional status. The plasma proteins are the primary transporters for five of the prescribed drugs and hypoproteinaemia may alter their effects and expression of their side effects.

Prescribed 2 drugs that alter glycaemic control, being paroxetine and Zyprexa.

Concurrent ingestion of paracetamol and iron results in increased rate of iron absorption and decreased extent of drug absorption; the authors advise drug and iron to be administered at different times from each other.

Ferrogradmet - time to dissolution at pH 1.2 (ie gastric environment) about 48 minutes, and at pH 5.8 (ie intestinal environment) about 362 minutes; gastric emptying time for adults is 3-6 hours, therefore any undissolved tablet will pass into the large intestine and be excreted. As Mrs ABI is prescribed Somac time to dissolution is extended and there is an altered gastric pH which means much lower amount absorbed therefore advisable to check SIS.

Two drugs prescribed that decrease B12 absorption, being metformin and Somac - the authors suggest an additive effect on B12 malabsorption.

Staff advise Mrs ABI eats all that is offered, and has also been observed to take food from elsewhere.

Mrs ABI is a small, pale lady of size who was participating in an activity when we went to speak to her - we did not disturb her.

Mrs ABI is pale and is prescribed both Somac which decreases iron absorption and ferrogradument which is an iron supplement. Advisable to check SIS and if not within acceptable range then consider why it is not - options being -

From staff comments Mrs ABI is chronically hungry which is likely exacerbated by insulin resistance and hyperinsulinaemia. Physiologically the body only releases insulin when glucose is present in the bloodstream - the chronic presence of insulin in the bloodstream results in the hunger hormone being continually stimulated and therefore a constant desire to consume more food; currently prescribed lantus.

The combination of falls and incontinence indicates an increased risk of low B12 status, and currently prescribed 2 drugs, being metformin and Somac, that are likely to exacerbate B12 depletion, therefore advisable to check B12 levels.

Mrs ABI has been prescribed warfarin for an unknown duration; warfarin antagonises vitamin K availability and a stable intake is required. Vitamin K is important in a range of body functions including the clotting cascade, bone health, glycaemic control, lipid metabolism, and production of myelin sheaths and neuronal membranes; and low vitamin K status is now being associated with cognitive impairment. It is likely Mrs ABI is low in vitamin K and has probably depleted her vitamin K stores. Advisable to check vitamin K status – either by blood test or by dietary record.

Mrs ABI’s large body size is likely due to a number of factors including limited activity, healthy appetite, and prescribed drugs such as metformin and Somac:-

Thiamine status is negatively impacted by 4 prescribed medications, being metformin, paroxetine, Somac, Zyprexa and intervention may be advisable – intervention best administered at least one hour before or two hours after administration times of the identified drugs.